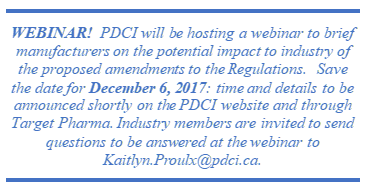 Proposed regulatory text of amendments to the Patented Medicines Regulations is published by the Governor-in-Council in Canada Gazette Part I (CG1) on December 2, 2017.  Interested persons may submit comments on the proposed regulations within 75 days of publication in CG1 (by our estimate February 15, 2018).   The Regulatory Impact Assessment Statement (RIAS) offers the rationale and justification for the proposed amendments.

It should be noted that the Regulations are distinct from both the enabling Patent Act and the Excessive Price Guidelines, the latter of which outlines the specific price tests and mechanisms for determining non-excessive prices.  Proposed amendments to the Guidelines will be announced separately by the Patented Medicine Prices Review Board (PMPRB) and be subject to a separate notice and comment period pursuant to ss. 96 (5) of the Patent Act.

While some changes to regulatory language have changed in the text published, the policies are consistent with the initial announcement by the former Minister of Health in May 2017.

The proposed amendments to the Regulations include:

See the proposed regulatory text as published in Canada Gazette Part I for more details.